How to manage flood risks and minimise impacts in Australia

Australia is prone to severe flooding - how can engineers and designers deliver better flood protection?

Flooding is a huge issue with often dramatic consequences in Australia. Recently, the town of Ingham in northern Queensland was massively impacted by flooding, along with neighbouring Halifax. A third of state local government areas were estimated to have been affected. Fire and Emergency Services Minister Craig Crawford told press that the damage would amount to “lots of” millions of dollars.

In late March, ex-cyclone Nora brought misery to northern Queensland, causing landslides that closed the Captain Cook highway north of Cairns. Low-lying parts of the town, and its neighbour Port Douglas, were flooded. To the west, remote communities on the Cape York peninsula’s western coast were also hit. Some areas north of Cairns received over 500 mm of rain in 24 hours, and the Gulf community of Pormpuraw lost power to hundreds of homes. The Insurance Council of Australia called the overall situation “catastrophic”.

In the midst of these events, the University of Newcastle issued research findings that highlighted the need to revisit flood management strategies and infrastructure that have been designed on the assumption that flood risk is static rather than cyclical – something their work disproves. The research found that the cycle of flooding is linked to major climate phenomena such as the El Niño/Southern Oscillation and Interdecadal Pacific Oscillation, which appear to have a marked effect on eastern Australian rainfall.

As a result, the researchers say,

“the resilience, life and adequacy of flood protection and flood evacuation infrastructure are likely to be overestimated in the flood-dominated decades that we know occur. Areas designed to deal with a certain chance of flooding may also find that in some years or decades the likelihood of these events has been significantly underestimated, which could have serious consequences.”

Climate change is also adding to the destruction wrought by cyclones and other weather phenomena. It is altering normal weather patterns, bringing severe rainfall out of season and in new locations, as well as unusual drought. Australia isn’t alone in suffering some of the worst effects – New Zealand was hit by the remains of Cyclone Gita in February, which damaged property and left thousands without power, and stranded up to 1,000 people on South Island due to flooding. North Island was battered by storms in January that flooded seaside towns such as Kaiaua and cut off Auckland, the country’s largest city.

Mitigating the worst effects of flooding

In planning any water management project, there are both structural and non-structural flood mitigation approaches that should be considered, with the possible options depending on a range of critical factors. When preparing new developments with flood risk in mind there are various non-structural modifications that can be made. Starting with the environment itself, options such as improved soil management in the upstream catchment, tree planting to absorb flood waters before they reach urban areas, and the use of “green dams” (e.g. fallen trees) to slow water, are all interesting possibilities.

Structural options include vortex flow control devices: low-cost, low complexity devices that have a number of different applications and provide site-specific water management across a wide range of flows.

Such flow control devices, installed as floodplain outlet flow controls, have been used with great success at Wigan and Glasgow, both notoriously flood-prone UK cities.

Wigan had been hit by flooding at least twice a year, for over 30 years, with over 600 properties exposed to flood risk from the local river. The £12 million ($21.9 million) Environment Agency project blended engineered solutions with natural features for optimal flood protection. Works included flood defence walls and embankments, and the construction of an earth dam across the upstream of the river to form a storage reservoir, teamed with a culvert beneath the dam that contained two Hydro-Brake® Flood flow controls that give precisely designed flow control. A habitat area immediately downstream created ponds and saw the planting of thousands of trees and shrubs. The risk of flooding from the river has now been reduced to just 1% in any given year.

As part of the White Cart Water flood prevention scheme outside Glasgow, the world’s largest ever Hydro-Brake® flow control devices were installed. During peak storms, the devices hold back the White Cart Water and its tributaries, releasing it downstream at a controlled rate so that it does not spill over new flood defences in the city. Upstream, 90,000 m2 of wetland habitat has been created. As a result, flows will be reduced by up to 45%, achieving a 1 in 200-year standard of flood protection.

Other relevant technologies include geocellular devices that provide below-ground storage and infiltration that are used as key parts of sustainable drainage solutions. Further options include environmental aids such as swales, detention ponds, green roofs and vegetated buffer zones.

Using the right mix of solutions, as part of an integrated water-sensitive urban design (WSUD) approach, Australian councils can ensure that peak flows are detained or reduced, then released slowly and naturally into the environment after pollutants have been removed. Selection depends on the relevant regulations, site topography, anticipated floodwater volumes and space available, as well as the available funding. 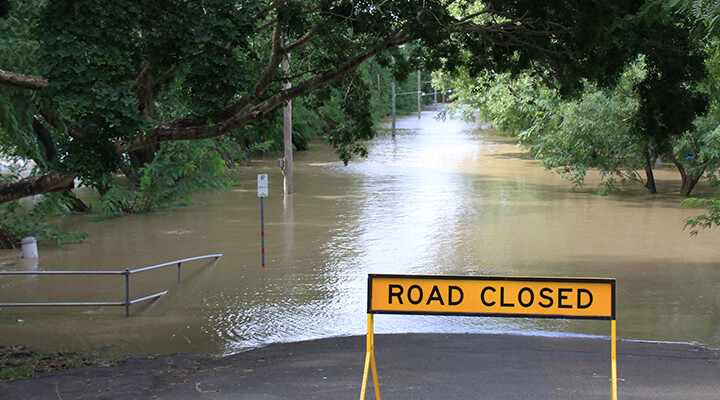 Get the Australia flood mitigation eGuide

This free eGuide provides guidance and tips to engineers responsible for designing stormwater management and flood mitigation projects in Australia. Get the Australia flood mitigation eGuide

This free eGuide provides guidance and tips to engineers responsible for designing stormwater management and flood mitigation projects in Australia.

Get the eGuide
Hydro Master Logo