Chris Newton responds to findings that 90% of the UK's floodplains have been changed so much that they no longer work properly - and recommends solutions.

The UK's floodplains "no longer work"

A recent report published by Co-op Insurance and the University of Salford has found that “90% of floodplains across [the UK] have been so severely changed that they no longer work properly”.

The report’s authors propose that the reasons behind this statistic are man-made surfaces, urban developments, and a change in land use, causing an overall reduction in the time it takes for water to land on the catchment and flow out to sea.

Floodplains, which are natural rural areas, help to attenuate the flow of water as it travels through the catchment. This can be controlled by vegetation increasing the roughness of the catchment. So if this attenuation is no longer occurring naturally, how can this be reinstated?

Examples of more natural attenuation being reinstated are Scottish Water’s Sustainable Land Management Scheme, South West Water’s Upstream Thinking and Yorkshire Water’s Catchment Management Programme. In these schemes, the re-growth and re-population of receding vegetation is attenuating rainfall, with South West Water already having achieved a reduction in the volumes of water leaving Exmoor by a third.

There are alternatives to these purely natural approaches. Systems and products that can also be used to achieve the same outcome are known as proprietary products, and they have been successfully employed to reduce the flow of water to near greenfield runoff rates or manageable levels to reduce the risk of urban flooding downstream. Examples where this has been achieved are on the River Douglas, Blackburn Brook and Weedon Bec. Each of the schemes contain multiple Hydro-Brake® Flood flow controls that reduce the downstream flow of water through already inhabited areas. The flow controls are used to store over 430,000 m3 of water, reducing the likelihood of flooding to under 1% per year.

In the report, Co-op Insurance also present insurance claim data showing that the average insurance claim per building was £44,000. In the case of the River Douglas flow control installation, which cost £12M and protected over 600 properties in Wigan, this project would save over £26.4M worth of damage every time it was fully activated by flood conditions.

58% believe that flooding is getting worse

The report also presents that 58% of UK adults that were surveyed “believed that flooding is getting worse”. This is somewhat the case in that population growth, urbanisation and climate change are affecting the behaviour of surface water runoff and causing flooding to occur in different locations and at different severities. The UK Climate Projections report in 2009 concluded that, generally, the number of rain days and total rainfall depths are reducing in the summer, but increasing in the winter. As a year on the whole, the worst case scenario suggests that in certain locations total rainfall depths will increase by 85% and the number of rain days will increase by 53 per year.

The above shows that the flood alleviation schemes that are being installed today need to be adaptable for the future, whether this means adopting designs that can be adjusted to meet changing conditions (such as using a flow control device with an adjustable inlet, such as a Hydro-Brake® Optimum flow control) or developing management strategies to warn the public when a potential flood event may occur. 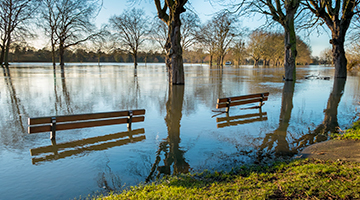 Get answers to the key questions about flood mitigation. We have launched a new range of Smart Monitoring products and services to help businesses and public organisations to understand their water environment and to make better water management decisions. Our experts can help you to plan, specify and maintain your flood mitigation project. Download the eGuide “How to design, implement, and operate a water management project to mitigate flood risk”.