Rapid population growth created the need for a plant initially designed for 5 MGD to expand four times over two decades to treat 27 MGD today. With no grit removal the plant struggled with grit since start-up, spending hundreds of thousands of dollars on contractors to remove accumulated grit every 2-3 years. The plant wanted to eliminate their grit problems once and for all.

Chandler, AZ is located just 20 miles from downtown Phoenix. The microchip manufacturer Intel® employs nearly 12,000 people in the region. In 1980, Chandler had a population of less than 30,000. In tandem with the exponential growth of computer technology, Chandler’s population had also exponentially swelled to over a quarter of a million today. With such a rapid growth rate the city’s wastewater infrastructure was becoming strained.

The Chandler Airport Water Reclamation Facility (WRF) was built in 1998 and is one of three WRF’s in area. Given the scarcity of water in south-central Arizona, Chandler’s Airport WRF is required to reclaim / reuse 100% of their wastewater. Chandler’s effluent water is held to a Class A+ water standard allowing direct use in lakes, golf courses, aquifer recharge, and landscape irrigation.

In 2009, the plant had undergone a major expansion to treat 15 MGD. At the time that $76 million project was the largest capital improvement project in the 98 years since the City was founded.

As a result of the growing population the plant had already been expanded three times until it could treat today’s 27 MGD capacity. Despite the three upgrades, a grit removal system had never been installed.

Historically incoming grit had led to increasingly frequent maintenance on all types of processes, reduced operating capacity, shortened equipment life, and increased energy costs to run grit choked aeration basins. This forced the plant to hire contractors every 2-3 years to perform the arduous task of cleaning out grit accumulated throughout various plant processes.

Tired of wasting money, time, and effort on this futile but necessary task, the plant hired Wilson Engineers to evaluate various grit removal technologies to determine which type of system would be capable of eliminating their grit problem.

Located adjacent to a busy municipal airport, the plant had limited space available for a new headworks grit removal system. Given their decades of experience struggling with the impacts of unchecked grit, the Airport WRF wanted a very low maintenance separation system with minimal moving parts and a proven track record of fine grit removal performance.

After start-up the new system’s performance was independently measured on-site and the performance results were even better than expected. In addition to protecting all downstream equipment in their plant and reducing energy consumption, the Advanced Grit Management® system eliminated one of their most expensive recurring maintenance costs. 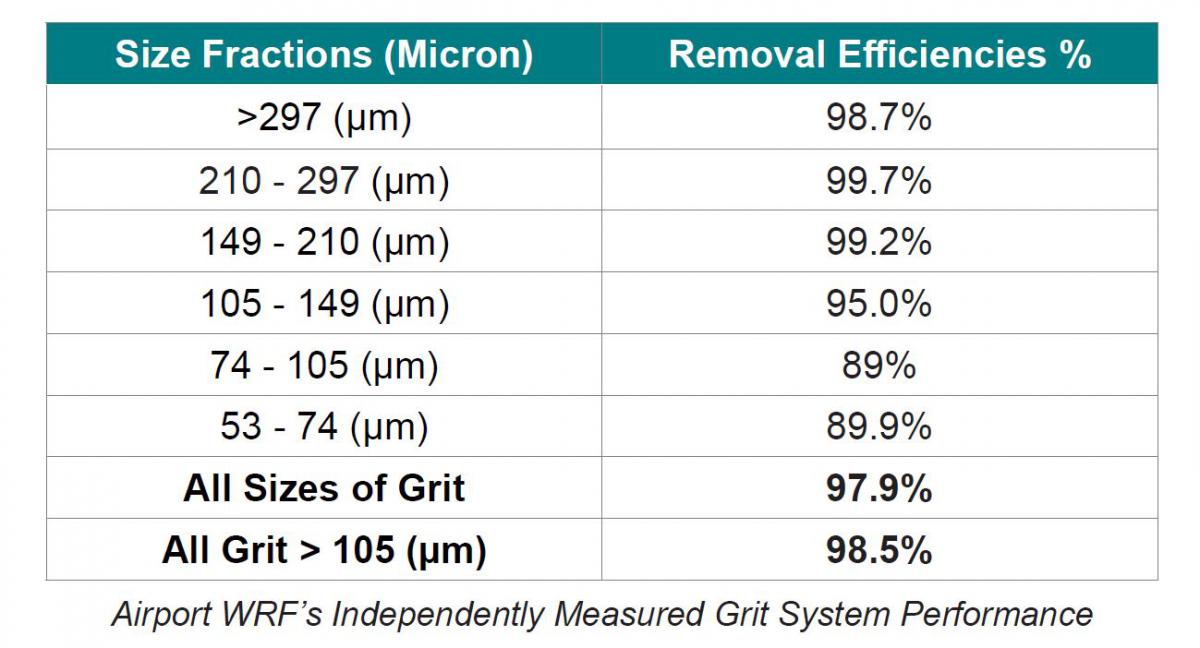